“The Last Vintage Levi’s” For The Ideal Gateway

[M.E.] The quintessential Levi’s are what received an explanation in the first issue of “The Gateway to Mature Vintage”. The silhouettes and details are varied across the generations. Beginners tend to stress out about which single one pair is best to get, however, if indeed you are going to get a pair, which is the best to start with?

[Nishiguchi] If your’re making it your first pair, the best is the 501 “66”model. They marked the peak of manufacturing in the 1970’s and are the latest model among the series to be called “Vintage Levi’s”. Consequently, what comes after model 66 aren’t “vintage” anymore, instead they are generally called “old Levi’s”.

[Nishiguchi] If I could just offer up some details, there are a bunch of different ones (see column above), however the biggest feature is really the silhouette. The 501 changed various details along with the time period, such as the seat, hem width and height of the rise, however the charming feature of the 66 model is that it has a slim tapered silhouette that is easy to match for someone just starting to get into tailored jackets.

[M.E.] That is definitely a reason for recommending it to beginners.

[Nishiguchi] That’s right. Furthermore, out of all the 66 models, the ones called “Early Period” are what we recommend as the entryway into vintage. The reasoning for that is the expression of color fading. The fading in “Early Period” examples is called “vertical fade” which gives the appearance of having vertical, white striations, which stand in contrast to the “Late Period” examples, which bear uniform color fading all-over. The theory that dyeing agents used between the “Early” and “Late” periods changed, seems rather plausible. The 66 “Early Period” is strongly recommended so you can really get a taste for that vertical fading, which is one of the real pleasures of vintage jeans. And by the way also in terms of price as well, these are much more affordable than the earlier “XX” and “Big E” models. This is another reason geared towards the entryway into vintage. Finally, this era of 501, of course, uses denim with selvedge flaps.

[M.E.] Indeed. By the way, why is selvedge denim seen as good? It’s a detail you wouldn’t know unless you folded over the hem….

[Nishiguchi] As for selvedge denim, once you start to wear it, the beauty really starts to come out around the out-seam. Such being the case, it really boils down to the fact that there’s a difference in the way they age. Incidentally in the case of the 501, once you get past the 1980’s era that mainly used the red selvedge (‘red line’), selvedge denim comes into disuse for a while.

[M.E.] Well, with with these you can enjoy that ageing unique to selvedge and that beautiful vertical color fade, for not such a steep price. That really is the reason why the 66 “early period” is the recommendation as the gateway to vintage.

A Mix of Vintage Gems. How do you choose?

[M.E.] Next we’ll ask about the way to make an in-store selection. Though there are certainly differences in price depending on the condition and the way they have faded, among other things, which type should you look for?

[Nishiguchi] First what I like to check is the hem area. In the case that the previous owner shortened the length, the hem disappears and becomes new-looking compared against the color fade of the rest of the denim. These are the ones that I avoid. Consequently, it’s not only extremely important to pick the right waist size, but also the correct length. If it’s just a bit on the long side, you can wear them with the hem turned up. After that, of course it’s ideal to have less damage on the garment, but consider the balance as pairs in great condition will go up in price as well. Try turning them inside out, ones without repair marks are recommended. As far as the fading is concerned, 66 “Early Period” pairs with 60% of the color left as compared to rigid are easiest to coordinate, I believe. They have a lighter atmosphere. By the way, it seems the ones in this photo are with about 40% of the original color remaining.

[M.E] That is certainly helpful. By the way, I hear there are some who deliberately size up in inches, rather than creating a just-fit, although….

[Nishiguchi] There are certainly people who think that way. When I want to match my attire to a more relaxed atmosphere, I too wear them an inch larger. However, in the case of the 66, since it’s firmly based on a clean and slim silhouette, I think it’s best to try them on at first from the “just” size. If you are going to pair them with a tailored jacket, having a “just” fit will make the them more easily coherent in the outfit.

[M.E] As another noteworthy point, how do you dress yourself stylishly and as a mature adult with vintage Levi’s. What points do you keep in mind regarding this?

[Nishiguchi]  This is a really difficult question, part of an ever-continuing theme. Since long ago in the industry its said, “you’re not a pro if you can’t dress-up a pair of 501’s.” You could call the 501 the “ultimate standard”. This means it can go in any outfit. Although beyond that, deciding the manner in which you want to wear them is difficult. In all my experience there isn’t something that I’ve tested out as much [as 501’s]. I, like many, have been wearing Levi’s continually since grade school, and I’ve really gotten to the point I’m at now by trying a lot of different ways to wear them. At first you have to entrust things to your senses and repeat the trial & error of it. If I were to give you some deliberate advice, it would be to try mixing a just-fitting pair of 66 “early period” model jeans with dressier items. As I said at the outset of this discussion, since the 66 is a tapered, slim silhouette it effortlessly pairs with dress items. Furthermore, based on the juxtaposition of new and old items, it’s interesting to enjoy the chemical changes in the garment. Depending on how both old and new balance against one another, we eventually get to see how the appearance is changed from the original. It could be said that this is the real absolute pleasure of “mix style”.

[M.E] I see, so it’s not just that they break in effortlessly, it’s that they reveal a new charm of their own. Well, with that we will conclude the first issue of this series. We’ll be explaining a different item in next time’s Vintage Guide for Beginners! 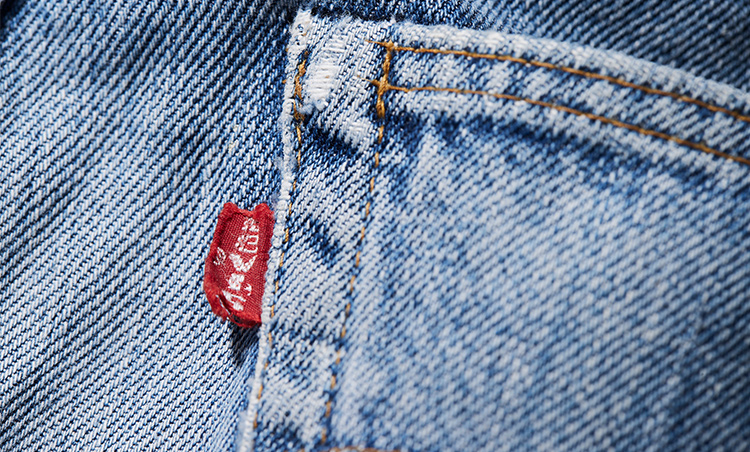 “In contrast with the 501 model manufactured before the 66 model, using a capital letter ‘E’ on the red tab brand label, the 66 Model uses a small letter ‘e’. This is called the “Small e” model and is one of the ways to distinguish manufacturing periods.” 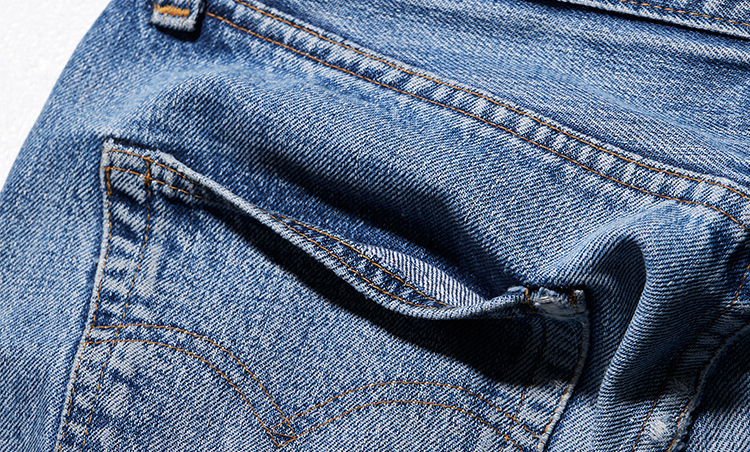 “The 66 model is split into the “early” and “late” models, and when it comes to distinguishing between the periods pay attention to the inside face of the pockets. The ones that have chain stitching just like the hem are from the late period, and the ones that are single needle stitched as in the photo above, fall into the category of early period.” 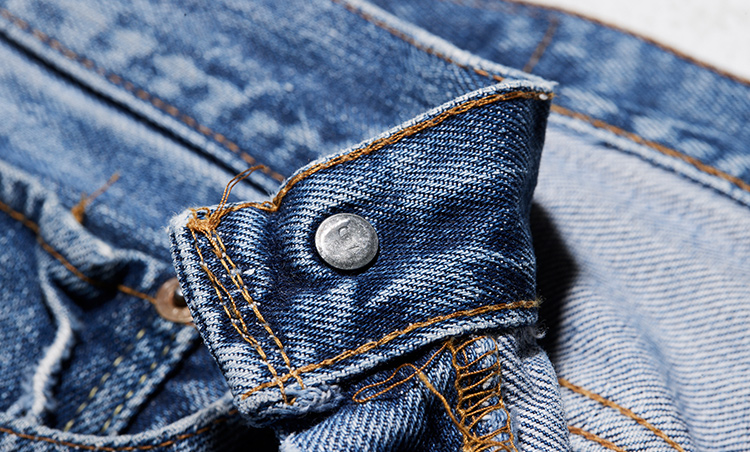 “If you look closely, you’ll notice that there is a number “6” stamped into the back side of the front button. This, as well, is a unique feature that reveals these are a 66 model. It’s a detail that doesn’t stand out, however, it’s considered an important matter in distinguishing between production eras among people who love vintage.” 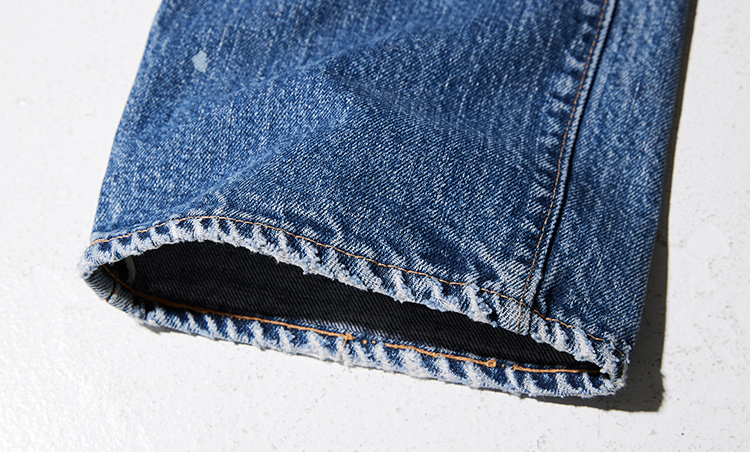 “Another thing that I’d like you to really pay attention to, not only with the 66, but also when picking any vintage clothing, is the hem. If the length has been taken up after someone started wearing them, the area around here becomes like brand new. If they are in that state, then half the appeal is lost. Consequently, it is fundamental to not shorten the length after buying [vintage].” 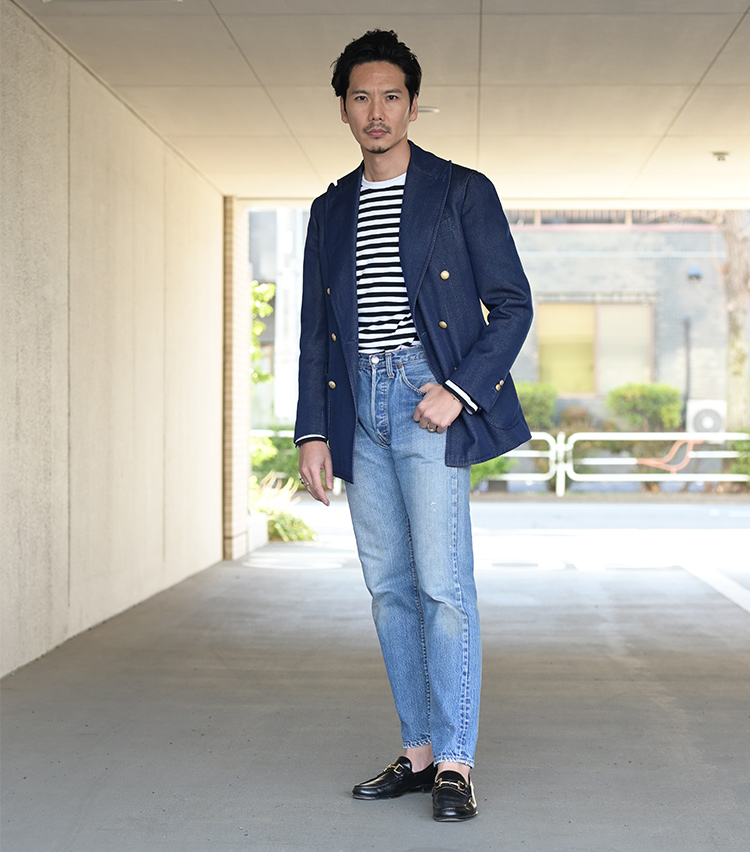 Nishiguchi-san coordinates a Stile Latino double breasted jacket and an Agnes B. border T-shirt, against a pair of just-fitting 66 “Early Period” model jeans. This is mix style in Nishiguchi’s fashion, weaving in old items and new. “I pair blue items a lot with faded jeans,” is how he puts it. While it is a simple outfit that narrows down the number of colors, the unique appearance of the vintage jeans brings out an impressive elegance. 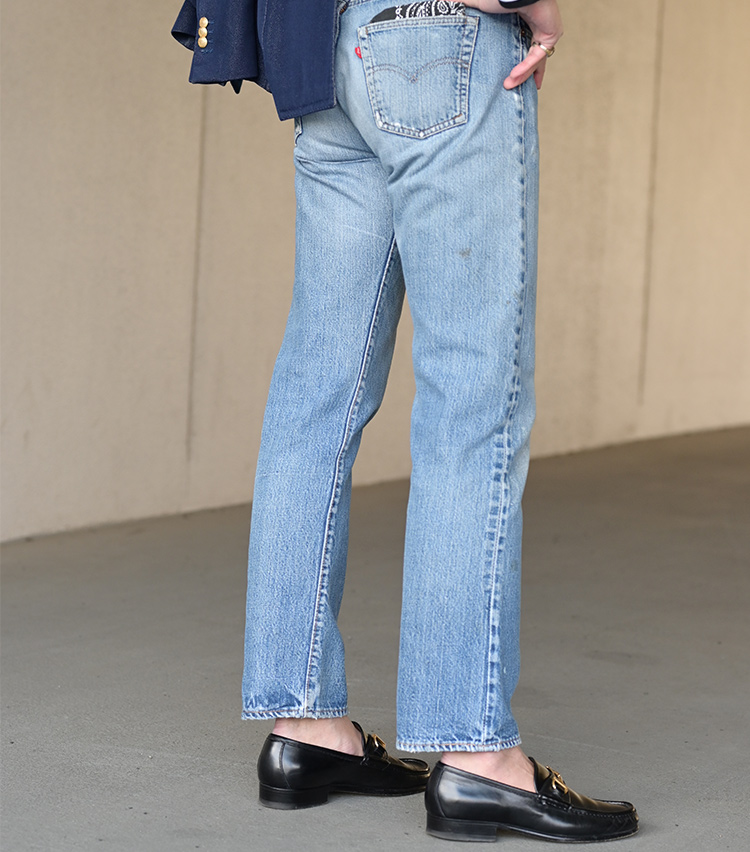 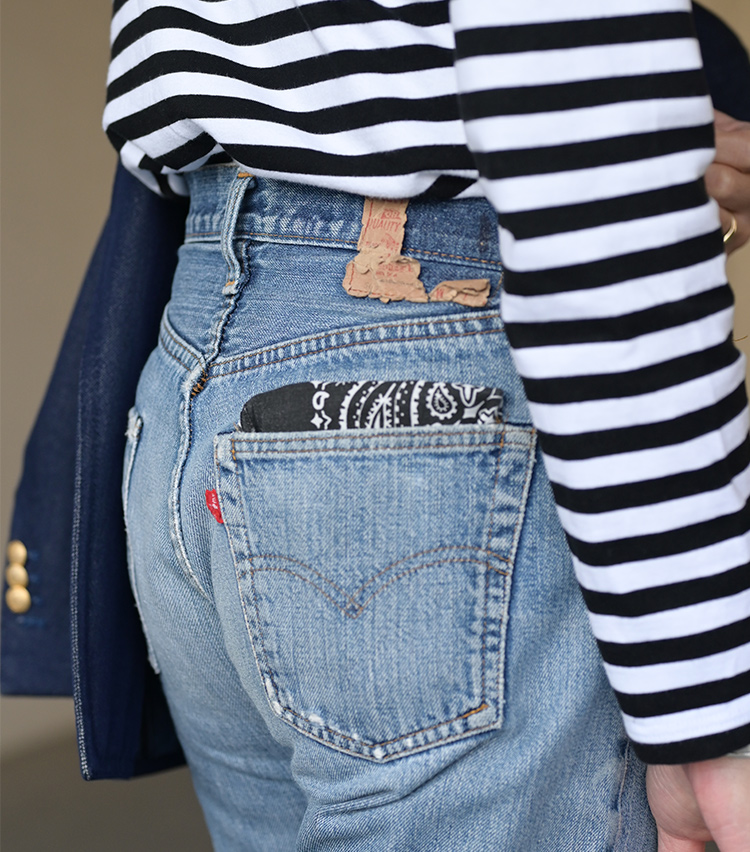 There is a bandana folded and inserted into the back pocket. “It’s really the same feeling as adding a pocket square,” says Nishiguchi. In summer, theres more occasion to take off your jacket, however, it’s a stylistic queue that keeps the same aura of elegance in that situation. 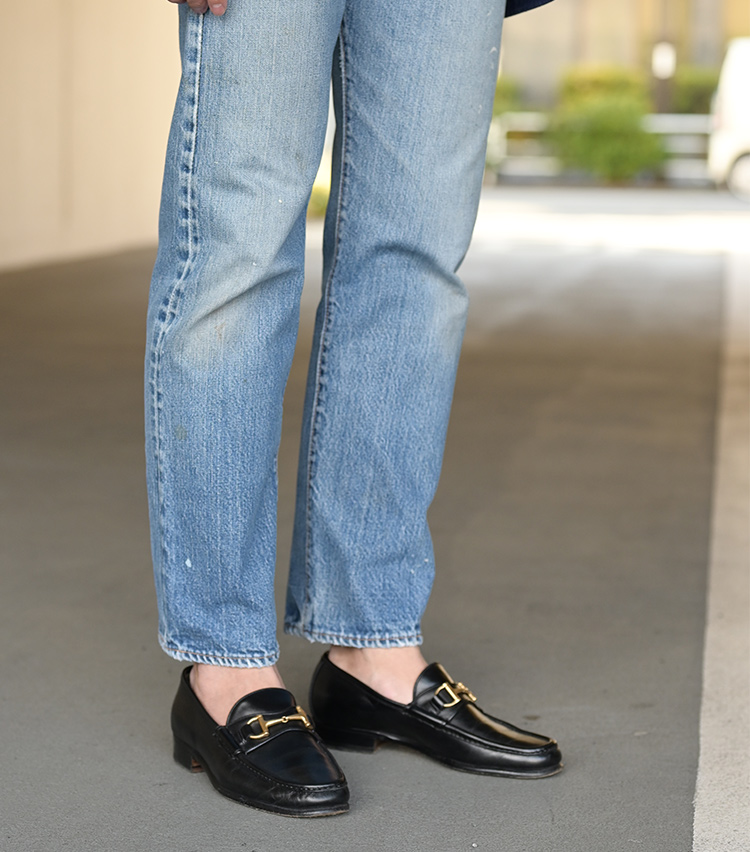 The shoes are Enzo Bonafe bit loafers. This standard combination with denim has been known for ages, and is one that Nishiguchi often coordinates with his footwear. Notice how the buttons on his jacket, the bit on his shoes and the ring on his finger are all uniformly gold. 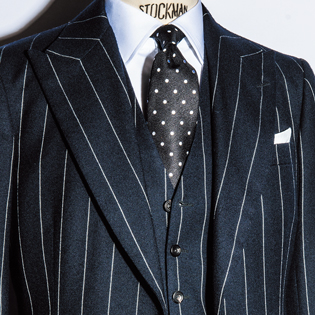 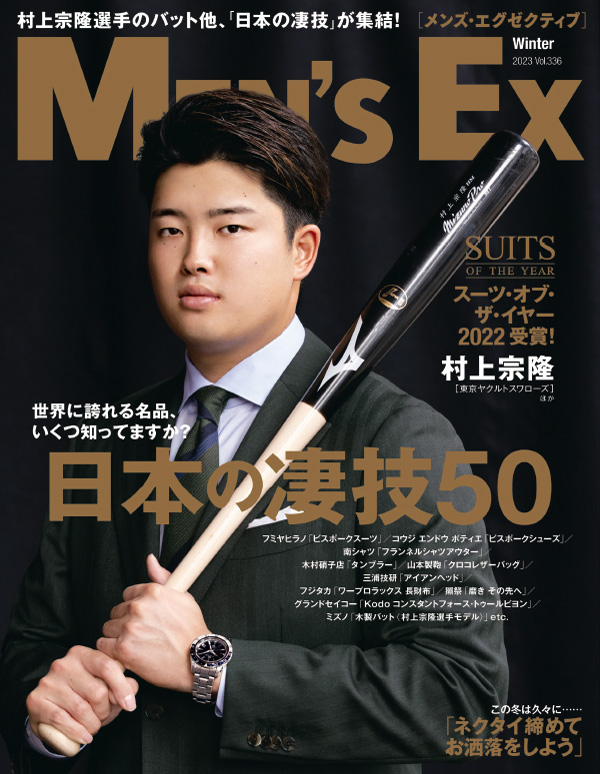